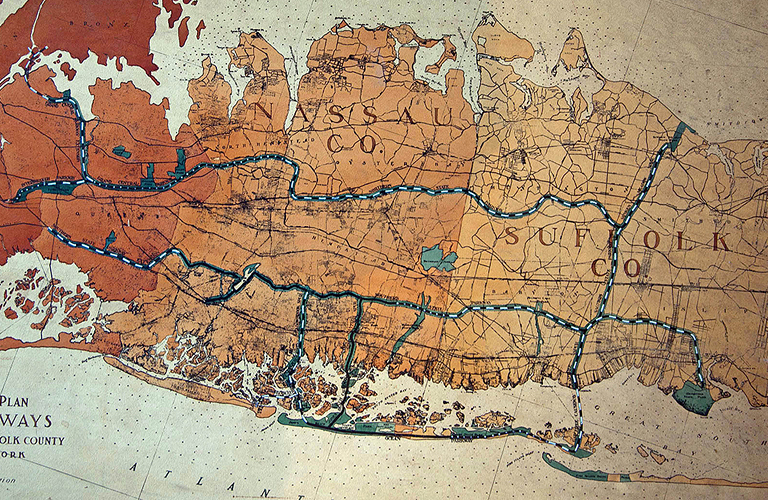 Detail of the 1931 planning map of the Robert Moses park and parkways plan. Source: http://www.vanderbiltcupraces.com/blog

To battle the depression of the 1930s, President Roosevelt proposed massive government spending on public works. In 1933 the future master-builder of New York, Robert Moses, had a plan ready to build a network of parkways to connect the parks in Long Island. To limit the access to the parks only to the rich and white New York residents, he made sure the bridges over the parkways were so low that public buses could not reach the parks. Robert Moses did not hide his disdain for the poor and non-whites, and as a state official actively helped to segrerate public works. As Parks Commisioner of New York City he built parks, ponds and 255 playgrounds built out of reach of the poor. He also saw to it that the Robert F. Kennedy bridge exit ramp was built in Harlem, clogging the streets with cars, so wealthier neighborhoods like the Upper East Side would not suffer the intense traffic to the bridge. Urban planning decisions from that still actively shape the lives of people today. Read more on Robert Moses in the award-winning biography The Power Broker by Robert A. Caro from 1974.